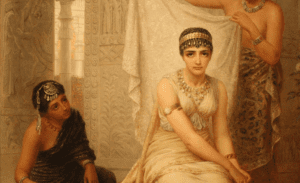 The Book of Esther is the story of a young orphaned Jewish woman living in exile in Persia under the protection of her uncle, Mordecai.  Esther worked her way into court and ultimately married Persian King Ahasuerus.  Those familiar with the Book of Esther may recall that it never mentions “God” – quite unusual for a book in the Hebrew Bible.  The Greek apocryphal version of Esther adds several sections that give the story a more explicitly religious character.

Charlie Walden will lead this four week study which takes on the Greek apocryphal version of Esther’s story.  For most of us, this new look provides not just a different twist, but also a different perspective of how God works in our lives.The study will be held in the New Revelations classroom (Dome Building), beginning Monday, January 16 at 7:00pm.

To register or for more information, please call the church office at 972-252-8519 or submit your information here.

Esther – A Four-Week “Out of the Mainstream” Class